Go beyond “Understanding China for the World”

On January 20th, 2021 (Beijing time), The Chinese People’s Association for Friendship with Foreign Countries (CPAFFC) and the Institute for Global Cooperation and Understanding (IGCU) of Beijing University organized an online memorial meeting for Ezra Vogel. The seminar is called “Ezra Feivel Vogel and the US-China Relations”.

The original title of today’s event is “Understanding China for the World”, which emphasizes on how Ezra Vogel helped the world to understand China. It is his success in doing this that has secured Ezra’s enduring legacy in the eyes of many Chinese people. China for a long time has desired someone capable of explaining it to the world in a way that would make China better understood. Ezra served that role. He acted as a friend who has China’s interests at heart, as a counsellor who understands China deeply, and as a cheerleader who feels proud of China’s achievements. Because of these roles, his abrupt passing has generated such an overwhelming reaction from China, a feeling of gratitude, loss, and admiration. It is time for us Chinese (including the Chinese people, Chinese academics, and Chinese leaders) to think deeply of Ezra’s legacy and more importantly how we can carry on Ezra’s legacy into the future.

1. What was the most valuable advice to China given by Ezra?

We are grateful to Ezra’s contribution to the field of China studies. Then we should ask what was the most valuable advice Ezra has given to China. I believe it is his advice that China should give up on the mentality of victimization, and give up on seeing the world through a lens of conspiracy and malice. Ezra has repeatedly reminded Chinese scholars that Chinese people should stop being a prisoner of such a narrow view of history. This narrow view of history distorted China’s understanding of today’s reality, both domestic and international. People of my generation grew up from an education that has welded this mentality to our minds. It will be difficult to break away from it. Many people in my generation, including some of my friends, are trapped inside that mentality. Some of them are simply unaware of such a trap; others may have realized it but refused to get out. Sadly, similar things are still happening to younger generations in China.

While we mourn the loss of Ezra, we should ask ourselves the following questions: Why are there so few friends like Ezra? How can we make more friends like Ezra? How do we avoid turning away potential friends like Ezra? How do we support friends like Ezra in ways they truly value? I have enough experience to know for sure that there are many people out there who are potential friends to China like Ezra, people who harbor good intentions and goodwill to the Chinese people. Some may not be as skillful, or may not like to be as careful, as Ezra knew how to say things in a manner that are received well by the Chinese authority. Many people in China have a habit to see foreign academics who are critical of any aspect of China as “enemy of the state”. Even Ezra himself did not get as much support from China in ways he really needed. Otherwise Ezra would have achieved even more.

China has attracted a lot of foreigners with its long history and unique culture. An overwhelming majority of these people come with goodwill. They criticize certain aspects of China out of intention to make China better. But in recent years quite a few of them have been treated badly or guarded as potential enemies. Many of them are hurt, disillusioned and disappointed. We need to know that it takes time, goodwill and open hearts to make friends. If we harbor suspicion and guardedness, we likely make enemies.

Ezra started to learn Chinese in his middle-age and insisted on keeping improving his Chinese skills at the age of 70s and 80s. I served as his Chinese tutor for quite some time. Often, I felt his energy and the vast amount of time spent on improving his Chinese skills might not be well-spent. He could have used that time on something more useful, something that cannot be replaced by other people like a good interpreter. But many years’ later, I understood the value of his action. By using Chinese or Japanese language in his interviews, he showed to his interviewees his earnest, most genuine effort to learn from them. This gesture of respect made a huge difference and opened a lot of doors for Ezra. Therefore, in my teaching, I always tell students to distinguish “studying people” from “learning from people”.

Professor HU Xiaojiang was a doctoral student of the late professor Ezra Vogel and received her doctoral degree in sociology from Harvard University in 2004. She began teaching at the School of Social Development and Public Policy at Beijing Normal University in 2006. Her research covers medical sociology, public health policy and the social aspects of vaccination. She has published articles in The Lancet, Vaccine and The China Journal.

50 Years Later: What China and the U.S. Can Learn from Ping Pong

Who is Qin Gang? 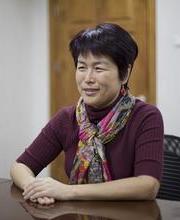 Professor in the School of Social Development and Public Policy at Beijing Normal University. She teaches research methodology, social development, and migration. Her current research interest is on migration and health. Prof. Hu has conducted many research projects on migration. Currently, she is the country leader of China of a European Union framework project on temporary migration between Europe and Asia. She has published in The China Journal, The Lancet, Vaccine, etc. and has served as a reviewer for many international journals. She is also on the reviewer panel of China’s National Science Foundation and Social Science Foundation. She received her PhD of sociology from Harvard University.