The following commentary was adapted from a speech delivered by Matt Geraci to the anniversary of the Fifth Young Scholars Forum on U.S.-China Relations.

Geraci is a research associate and program officer at the Institute for China-American Studies. He received his BA in East Asian Studies with a concentration in China from Bucknell University. He earned his MA in International Economics and International Relations from the Johns Hopkins University School of Advanced International Studies. He spent his first year of graduate study living in China at the Hopkins-Nanjing Center, where the majority of his coursework was conducted in Mandarin Chinese. He attended Middlebury College’s Summer Language School to enhance his Chinese proficiency. Matt’s research specializes in the nexus between energy, natural resources, and environmental issues.

The United States and China are competing fiercely in many areas over various economic, strategic, and human rights issues that will not be resolved anytime soon. There is likely not a soul with a television or internet connection who is unaware of this. However, at a time when the need for openness, honest dialogue, and cultural understanding is at its greatest, the governments of the United States and China have worked to shut these doors instead. It is thus left to emerging academics and independent media sources to attempt to break through this monolithic mold.

The openness of the U.S.-China relationship allowed me to attend the Hopkins-Nanjing Center (HNC), a joint educational venture between Johns Hopkins University and Nanjing University, during its 30th anniversary. Within this historic graduate program, which continues to be a shining example of academic freedom, I had the opportunity to both learn from and teach my fellow Chinese cohort. As former U.S Secretary of State Madeline Albright said during my commencement, “Through 30 years of ups and downs in the relationship between China and the United States, the Hopkins-Nanjing Center has overcome its own challenges and thrived. It has done so because at its core is a simple, and vital, mission—to help Americans learn about the real China and Chinese to learn about the real United States.” As though it were a microcosm for the U.S.-China relationship at large, the HNC has shown that it can endure during highly tumultuous periods, such as the 1989 Tiananmen Square Protests, the 1999 U.S. bombing of the Chinese Embassy in Belgrade, the 2003 SARS crisis, and even the ongoing COVID-19 pandemic.

The close ties that my HNC cohort shared did not mean we agreed on everything, yet this was a vital component to our experience. The program created an atmosphere that allowed each of U.S. to freely speak our minds, which is unfortunately now increasingly rare. Though in distinctive ways, the diversity and tolerance of different viewpoints have continued to diminish in both countries, particularly within the academic community where it should thrive the most. Despite these differences, we lived and ate together in the same house and formed lasting and meaningful friendships. Had it not been for the past policy of engagement that is now being reassessed, which admittedly had enormous flaws which were long overdue in being addressed, the personal and professional growth I experienced could never have occurred for myself or my fellow classmates.

This rosy picture for the U.S.-China relationship painted by the HNC would not last. In such a short time after my graduation from the HNC in 2016, I have witnessed the trajectory of not just the bilateral relationship itself, but even conversations and debate accelerate backward. Increasingly, there has been a wanton rejection of honest discussions being held over topics considered taboo or a red line by either side, leading to ‘whataboutisms’ in an effort to appeal to respective domestic audiences rather than making an honest effort to find some middle ground. Of late, this trend has been exemplified recently by the so-called ‘wolf warriors’ within China’s Ministry of Foreign Affairs. This disingenuous behavior further justifies Americans who believe bringing China to the negotiating table at all is merely a diversionary tactic. This form of conduct manifested within the Trump administration as well, with some high-ranking members of the U.S. State Department appearing to revel in antagonizing their Chinese counterparts to merely garner support from their political base. It is unsurprising that, even with a change in the U.S. administration, that those frustrations on both sides came to a head at the Anchorage meeting in March.

Unfortunately, this trend has bled out from the government level into the academic and private-sector levels as well, leading to the direct expulsion of or pressure for foreign journalists to leave China, or the targeting of largely benign academic institutions like the Confucius Institutes that have fallen prey to American politics. The number of Americans studying abroad in China has continued to decline since 2011. Coupled with increasingly unfavorable sentiments toward China that have reached record highs, it will become more difficult for the two countries to understand one another. As Ambassador Stapleton Roy stated, the United States “thinks about change in China in much too short a time frame” and that the “outcome [of competition with China] will be determined over decades, not simply over a few short years.” This is to say, in part, that kneejerk reactions in the short term that close avenues and opportunities for Americans and Chinese to interact and learn from one another, particularly in academia, do not serve the long-term interests of either country.

People-to-people exchanges must be encouraged and are essential moving forward. However, those who participate in dialogue cannot shy away from criticism. Track II scholars must help guide debates and conversations, to display leadership where our governments have failed to do so. As each side tows a harder line, it will become more challenging, yet more critical, for alternatives to be presented and voiced. The message here is not an attempt to disregard the serious frictions that prevail in this relationship, but rather a desire to confront them with sincerity. Young scholars have both the privilege and responsibility to lead the U.S.-China relationship into a new era, even when, as Secretary Blinken has repeatedly said, the relationship is “competitive when it should be, collaborative when it can be and adversarial when it must be.”

The views expressed in this commentary do not necessarily reflect those of the U.S.-China Perception Monitor or The Carter Center.

How to Prevent a US-China Nuclear Confrontation

There are practical steps that can be taken to ameliorate some of the most concerning risks surrounding potential for US-China nuclear escalation. 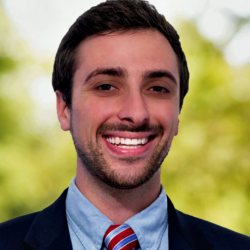 Matt Geraci is the manager for the ICAS Maritime Affairs Program where he leads the Maritime Issue Tracker Project.