NOTE: The views expressed in this speech do not necessarily reflect those of the U.S.-China Perception Monitor or The Carter Center.

The following speech was delivered April 9th, 2021 at the Commemoration of the 5th Anniversary of the Young Scholars Forum on U.S.-China Relations by former Vice Minister of Foreign Affairs He Yafei.

He is a Distinguished Professor of Yenching Academy. He graduated from the University of Hangzhou with English major in 1979, and completed United Nations interpretation master’s program at Beijing Foreign Studies University in 1981. Between 1982 and 1984, He worked in the Secretariat of the United Nations (New York).

After coming back to the Ministry of Foreign Affairs, he held positions in the Department of African Affairs, the Department of International Organizations and Conferences, Permanent Mission of the People’s Republic of China to the United Nations, Embassy of the People’s Republic of China in the United States of America, and the Department of North American and Oceanian Affairs. In January 2005, he was appointed as Assistant Minister of Foreign Affairs. In 2008, he took office as the Vice Minister of Foreign Affairs. Between 2010 and 2012, he served as the ambassador of China in United Nations Office at Geneva and representative of other international organizations in Switzerland. Between 2012 and 2016, he served as Deputy Director of Overseas Chinese Affairs Office of the State Council.

It is a great pleasure to speak at this special session to celebrate the fifth anniversary of China-US Youth Forum.

We are at a critical juncture in China-US relationship that has witnessed huge vicissitudes over 4 decades and reached a historical low in the last few years with a rising strategic competition unfolding before our eyes.

Strategic competition between US and China is a reality today that nobody can ignore. It may not be what China wants. Unfortunately, it resulted from misjudgment based on U.S. retrospection about bilateral relations over the years and is not going to change any time soon despite the changeover in the White House early this year. The most urgent thing is how to redefine and recognize the ever-evolving new relations of the two countries and design a new path forward.

The key is no doubt for both to try caging the strategic competition in a broadly accepted framework by understanding and gradually overcome or shelfing the daunting multifaceted differences while striving for possible cooperation via dialogue and confidence-building measures. The recent Anchorage China-US strategic dialogue proved to be a good start point in that direction that could lead to further dialogue though the opening session was quite rough and tough.

In designing and negotiating such a framework, both sides need cool heads in considering where we’ve come from and where we’re going. They should make every effort to avoid a new cold war or hot war as emphasized by President Xi in his phone conversation with President Biden right before the Spring Festival, while finding and expanding the space for cooperation whenever and wherever possibilities occur. Of course, there’s no basis for assuming blindly that a new U.S. administration will instantly change everything.

What we need today to turn the tide in a worsening China-US relationship is the same if not more courage and strategic vision displayed by Mao, Zhou and Nixon, Kissinger. History is our teacher. Here I’d like to quote what President Xi said about the future relations between China and the US, that “there is a thousand reason for better China-US relations and not a single reason to destroy it”. The history of China-US relations has repeatedly told us that it is so much true. The cost of full confrontation between two major powers could be catastrophic not only for both but also for the world.

It is understood that Biden administration will face daunting challenges in resolving domestic problems and adjusting foreign policy. Adjustments to China-U.S. relations will also be subject to such domestic constraints propelled by populism, identity politics and political decay as described by Prof.Fukuyama.

First and foremost is for two countries to cool-headedly reevaluate and reassess where we are, how we got here and if unchecked where we will end up. The 30-40 years of cooperation/competition between China and the US with the former being the mainstream most of the time is a good reminder that there were and will be overlapping points in each other’s strategies in any given time frame both past and now. For instance, both nations wish to address urgent domestic issues and constantly improve people’s livelihood and for that purpose both need peace and prosperity of the world. As major powers both shoulder important and heavy responsibilities as enshrined in the United Nations Charter.

As balance of power keeps evolving in favor of developing countries represented by China and others, a new pattern of major power relationship will emerge. It is not up to one country to decide what it will be. It will be shaped by the strategic visions and interactions of major powers. Should they work together sharing the same strategic vision for global peace and economic progress, the future of the world would be much bright. Were they to miscalculate with misperception about the others’ strategies and actions, disasters would be unavoidable. Given that, the present imperative is to recognize the ongoing competition and try to build a “cage” — a framework with bottom lines, and acceptable rules — to prevent competition getting into a zero-sum game. This is positive thinking neither optimistic nor pessimistic as China often advocates “to find commonality while put aside differences” (和而不同)。

It is often said that youth represent the future. I do hope very much that young people all over the world especially in China and the US will take a proactive and upbeat approach to this extremely important bilateral relationship of the 21st century, learn from the history and engage extensively both at strategic and actionable levels to contribute for a better future for our two countries. There are so much you can do to turn around the bilateral relations in the right direction of peaceful competition and fruitful cooperation.

Here are a few suggestions:

First, proceeding from bottom-line thinking, the two countries’ competitive relationship should be acknowledged and clarified. Whether their future will be competitive cooperation or cooperative competition, whether they can identify and enlarge the space for cooperation and realize peaceful competition hinge on each other’s reassessments of their strategies and on-the-ground policy interactions. Therefore, any strategy of zero-sum nature does not serve anyone’s interests as it will only draw the two countries into a conflict-prone dead-end. No one can come out as a winner. It is a lose-lose competition both should avoid. In this sense, strategic dialogue, no matter how difficult, must be conducted as often as possible.

This was precisely what President Xi Jinping meant when he emphasized in his congratulatory telegram to Biden and during their conversation later that China and the U.S. must proceed in a spirit of no conflict, no confrontation, mutual respect and win-win cooperation. They should in principle leave no stone unturned to avoid full confrontation, instead focus on possible areas of cooperation, manage competition well in order to promote healthy and steady bilateral ties. This is the bottom line of caging.

Second, the two countries need to have a correct understanding of their cultural and ideological differences to reduce hostility and avoid sinking into an ideological quagmire. Currently, a growing percentage of people in two countries view each other with negative feelings. Unilateral restrictions by the U.S. as well as the pandemic, have brought bilateral personnel and people-to-people exchanges to a virtual halt, even affecting students seeking to study overseas in either country. It is simply wrong and not going to work by lining up countries in ideologically delineated camps with labels such as “liberal democracy” and “illiberal countries”.

Ignorance about Chinese culture and the Judeo-Christian sense of cultural superiority have often led to prejudice against the Chinese political and social systems among U.S. elites in both political parties who look at cultures and political institutions that are different from theirs with disdain and prejudices. If the “shining city on a hill” thinking doesn’t change, U.S. understanding of China will go awry again and again with inevitable misjudgments.

Zero-sum logic combined with ideological bias has led US Administrations of Trump and now Biden to exclude and suppress China in the field of high technology, with a proposed technology group of 12 democracies (T12); elevating U.S. dialogue with Japan, India, and Australia in the Indo-Pacific to a quadruple alliance against China. It is a dangerous and slippery path to follow.

Third, the two sides should start to talk on selected issues of common interests or challenges while considering taking parallel, pragmatic confidence-building measures wherever possible so as to patch up trust deficits and look for opportunities for cooperation. This will create conditions step-by-step to an orderly and peaceful competition.

One inspiration that can be drawn from the steady progress of China-U.S. relations over the decades is the two countries are not like Britain and Germany before World War I, nor like the U.S. and Soviet Union during the Cold War. The two have successful experiences in seeking points of convergence based on cooperation in the face of fast and fundamental changes.

Nobody is suggesting the way forward would be easy.

There are two things standing out for our serious consideration.

One is the fact that the world has changed fundamentally as the Moment of Singularity has been replaced by a growing multi-polarity that calls for power-sharing and responsibility-sharing, especially among major powers. The new world order is on the horizon being shaped among other things by the evolving China-US relations which harbor much unpredictability and uncertainty.

Two is the reality that shows unmistakably a mixture of traditional and non-traditional security threats coming to hit mankind at the same time. Climate change and the pandemic are the two “perfect storms”. With more than 130 million people infected and over 2.8 million deaths, it is a wake-up call to all countries that we are facing an existential threat which needs global solidarity and cooperation as displayed during 2007/2008 global financial crisis. Unfortunately, it is sorely lacking and in particular there is a lack of consensus and willingness among major powers to provide leadership in our collective fight against such unprecedented global challenges. The US as China has done should keep the big picture in mind and move ahead in cooperation with China to take up such daunting challenges while putting aside any differences between the two countries for the benefit of the global community. 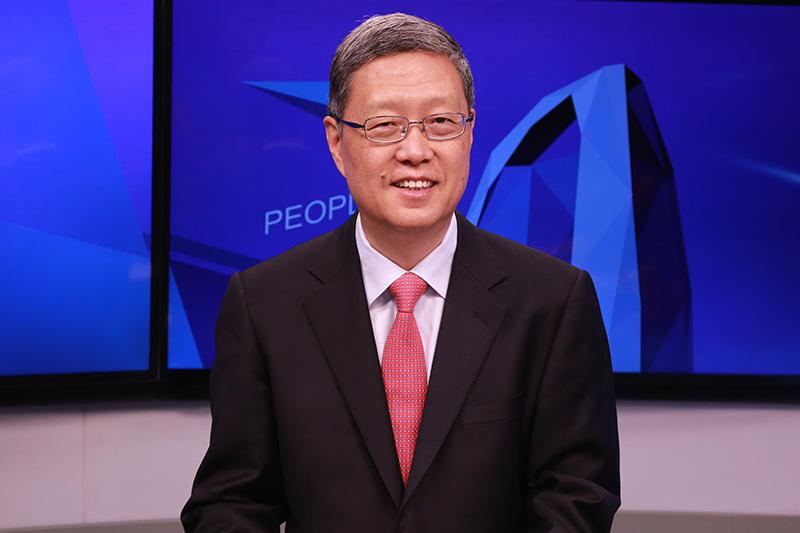 He is a Distinguished Professor of Yenching Academy and a former Vice Minister of the Ministry of Foreign Affairs (2008-2009). He graduated from the University of Hangzhou with English major in 1979, and completed United Nations interpretation master’s program at Beijing Foreign Studies University in 1981. Between 1982 and 1984, He worked in the Secretariat of the United Nations (New York). Thereafter, He was a career diplomat in the Ministry of Foreign Affairs.